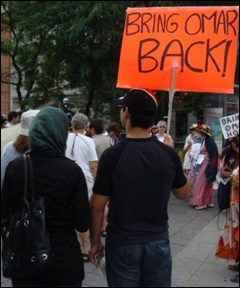 This article is in lieu of the long delayed fourth part of the Omar Khadr series written on WL Central last May. The original fourth part consisted of hours of interviews regarding the astoundingly corrupt and illegal military process which culminated in a verdict which allows the Canadian press to refer to Omar Khadr as a ‘convicted terrorist’. One day the information in those interviews will be widely known, but today we are still prevented from publishing any of it for fear of retribution to those we do not wish to harm.

Today, Omar should be at home in Canada, as promised by the Canadian government as a term of his acceptance of a plea deal. Today, he is still in Guantanamo Bay serving what the US military terms “punitive post-conviction confinement.”. A little known fact regarding the Guantanamo sentences is that time served before sentencing is not considered ‘punitive’ and therefore does not count as time served towards his sentence. Omar’s sentence is to be carried out in a solitary confinement ‘enhanced interrogation’ environment, and at the end of his sentence he can be placed back in ‘Prisoner Of War’ status in the Guantanamo cells he has spent his life in since he was 15 years old. Without repatriation to Canada, his eight year plea deal is just an eight year sentence to solitary confinement in the middle of a lifetime sentence in Guantanamo.

Miami Herald’s Carol Rosenberg writes, But Bahlul and Qosi, Khadr and Noor are segregated because they are “serving punitive sentences,” says Navy Cmdr. Tamsen Reese, a Guantánamo spokeswoman. Under the 1949 Third Geneva Conventions, she said, the other captives are “detained under the Law of War only as a security measure” and “should not be subjected to a penal environment or comingled with prisoners punitively incarcerated as a consequence of a criminal conviction.” Once their sentences are over, under Pentagon doctrine, they become ordinary detainees again — put back with the others in a penitentiary away called Camp 6, the closest thing at Guantánamo today to POW-style barracks housing.

I spoke last summer to Omar’s former defense attorney Dennis Edney about his current condition. “Omar is doing his post sentencing time back in Camp 5 which as the Pentagon states is “designed for enhanced interrogation techniques”. He is back in solitary confinement where he has spent so much of his life. Prior to trial, we were able to have him removed to the cages where he was able to socialize with others which made him happy. He is not happy and has been subject to interrogations by the FBI.”

In this isolated and unsupported environment, “He is never allowed mail from other than family which rarely arrives.” As part of his ‘plea deal’ he is not allowed to have legal counsel present during his interrogations.

Thanks to Canadian Prime Minister Harper’s appeals, all levels of court in Canada have agreed, in 2008 and again in 2010, that the Canadian government has violated Omar’s rights under Section 7 of the Canadian Charter of Rights and Freedoms by interrogating him at the Guantanamo Bay facility in 2003 and 2004 and by sharing information from those interviews with U.S. authorities despite knowing that in 2004 U.S. authorities had subjected him to illegal interrogation methods, including sleep deprivation. It further found that his status as a minor, his detention without counsel, and his interrogators’ awareness that he had been subjected to sleep deprivation were “not in accordance with the principles of fundamental justice.”

Omar was sentenced in October of last year. In a diplomatic exchange with the United States which formed part of Omar’s plea deal, the Canadian government wrote “The Government of Canada therefore wishes to convey that, as requested by the United States, the Government of Canada is inclined to favourably consider Mr. Khadr’s application to be transferred to Canada to serve the remainder of his sentence, or such portion of the remainder of his sentence as the National Parole Board determines” after his first year of post-trial incarceration.

Omar’s defense counsel filed the paperwork for his return in October. Now we are told: Corrections officials have received the request for transfer and now have to determine if Khadr is eligible to return to Canada to finish out his sentence. Once Canadian officials determine that, they send an official request to American officials. If U.S. officials agree, Public Safety Minister Vic Toews has the final say. He has the option of refusing the transfer if he decides Khadr is a risk to public safety. The process is expected to take about 18 months. A spokesman for Toews said he doesn’t comment on individual cases.

In addition to this, the United States now must certify Canada as a fit place to send a convicted terrorist, a nation not likely to permit him to attack the United States, and one that has control of its prisons. That certification must be delivered to Congress signed by U.S. Defence Secretary Leon Panetta with “the concurrence of” U.S. State Secretary Hillary Clinton.

It is well documented in the US State cables released by Wikileaks that Canadian indifference and hostility have had everything to do with the torture and unlawful confinement of a child and the continuing suffering of the only western citizen left in Guantanamo Bay. “There would be virtually no political blowback domestically for the Conservative Party if the government chooses to pursue an appeal, making this a strong likelihood.” reports one cable.

December 10 is World Human Rights Day, the day the world celebrates the 63rd birthday of the Universal Declaration of Human Rights, written first by Canadian John Humphrey. If Canadians are ever again to hold their heads up on this day, we must remove this human rights blight from our actions by finally repatriating the man we have victimized since he was a child.

WL Central calls for immediate action to defend the rights of this Canadian citizen.