Today, December 18, a Statement of Claim by Omar Khadr to the Canadian government was presented to the Federal Court. Omar Khadr’s original claim was amended to reflect the ongoing illegal detention and abuse.

As Phillips Gill, lawyers who represent Omar Khadr have stated: “The story of Omar Khadr and his continued detention is one of which every Canadian should be aware. But not, perhaps, for the reasons you might think. The importance for Canadians isn’t terrorism, or the U.S. war in Afghanistan, or even Omar’s guilt or innocence. This is about fundamental rights – rights that the Canadian government has guaranteed in our constitution to apply to every Canadian citizen – and how those rights appear to have been ignored in Omar’s case..

There are certain facts that, regardless of your position on Omar’s plea that allowed him to be moved from Guantanamo cannot be ignored when we talk about Omar.

First, he is a Canadian citizen. No one doubts that he was born in Ontario, and spent the first portion of his life here. His family moved around as he grew up, but throughout they have maintained connections to the Toronto area. And there is no suggestion that Canada has taken any steps to have Omar’s citizenship revoked. Like any person born here, Omar is subject to the same rights and responsibilities afforded any Canadian citizen. That includes protections afforded under the Charter of Rights and Freedoms.

Second, at the time of the alleged attack that resulted in the death of an American soldier, Omar was a fifteen year old child. And being fifteen and in a war zone Omar was, at a minimum a child, by definition under Canadian and international law, and if he was involved in battles, a child soldier. As a country, Canada has recognized that child soldiers are not like other, older combatants. And so, we as a country have chosen to sign on to the U.N. International Convention on the Rights of the Child, and recognize the Riyadh Guidelines for the prevention of juvenile delinquency.

Together, these two facts, Omar’s citizenship and age, create a series of obligations that Canada was duty bound to follow upon his detention in Guantanamo Bay, Cuba.

The Supreme Court of Canada has already found that Omar’s Charter rights were violated when Canadian officials travelled to Guantanamo Bay to interview him.

Basic tenets of Canadian constitutional law were ignored, and Omar was placed in the position of missing protections that are given to every accused person who has to face questioning. This is true even if we ignore the fact he was undergoing torture during his confinement.

In addition to any potential Charter violations, there is the issue of how child soldiers are to be treated.

Across the world we have seen the result of young people drafted into armed conflict.

The United Nations, in a convention that Canada has ratified, has recognized that children should be rehabilitated rather than punished for their involvement in wars. This is not a recognition that is done on a case by case basis. Rather, all child soldiers are treated as victims of war. Omar has never received any of the treatment required under the Riyadh Guidelines, and Canada at no point demanded this of the U.S., or offered rehabilitation since his return to Canada. Consistently, he has been treated as a “terrorist” rather than victim.

Why Canadians Should Care

So why should this matter to you? Because Canada does not have the ability to arbitrarily or capriciously pick and choose which of its citizens get the benefit of its full protection. Whether innocent or guilty, there is a duty on Canada to uphold the values of the Canadian Charter and any international conventions to which we are signatories. This civil suit is not about whether or not Omar threw a grenade. It is about what Canada needed to do, regardless of whether or not he is ultimately responsible. We do not have a two-tiered citizenship in Canada, and a failure to provide protection to one citizen is a failure for all of us. If Omar is to be detained, it should be in accordance with Canada’s responsibilities to all its citizens.

Ultimately this law suit is about accountability of the Canadian Government to all Canadians. This suit will determine first whether Canada breached its obligations under the Charter and in international law when it interrogated a Canadian citizen held at Guantanamo Bay, and then took no steps to enforce the Riyadh Guidelines either in Cuba or back here in Canada.

Then, if there were breaches, was Canada entitled to abandon one of its own. The results of this suit will have an impact on the rights of all Canadians”.

Omar Khadr’s security classification has been changed from maximum to medium. Omar was transferred from Guantanamo to Canada in September 2012 and placed in a maximum security jail. This placement was harshly criticized by The Office of the Correctional Investigator (OCI). “The OCI has not found any evidence that Mr. Khadr’s behavior while incarcerated has been problematic and that he could not be safely managed at a lower security level. I recommend that Mr. Khadr’s security classification be reassessed taking into account all available information and the actual level of risk posed by the offender, bearing in mind his sole offence was committed when he was a minor.”

Omar Khadr was classified as minimum security in Guantanamo. The OCI further noted that “According to a psychological report on file, Omar Khadr interacted well with others and did not present with violent or extremist attitudes”.

Many Canadians are pleased that the new classification will allow Omar to access programs, and services. However, it doesn’t alleviate the fact that Omar’s imprisonment is an abuse of human rights and the rule of law.

Dennis Edney, Omar’s lawyer said “My position is similar to that of the Ombudsman’s office he should be classified as minimum and released.”

Edmonton Journal: Khadr reclassified, likely to be transferred to Bowden

Dennis Edney QC who has defended Omar Khadr on a pro bono basis for over a decade, wins the Gerald L. Gall Human Rights Award.  It is the highest honor one can receive from the John Humphrey Centre.

Omar Khadr is still suffering from the wounds he got when the U.S. military shot him twice in the back, at age 15.

Omar’s treatment in a Canadian prison is more harsh than at Guantanamo Bay, says a former U.S. military psychiatrist who spent more than hundred hours with Omar.

“I’m very dismayed … The physicians are obligated, as we’re always obligated, to provide the best care that we can,  and this man needs that treatment.”

Omar is  being held at a maximum security prison in Edmonton, it is a prison for hardened criminals, Xenakis said, where there have been at least five murders in the past five years. “That kind of thing did not happen in Guantanamo.” At the U.S. prison in Guantanamo, Omar was kept in a cell with five or six others and had the support of a community. Now, he is considered a maximum security risk.

“Incorrectly, he’s being treated as a criminal,” Xenakis said.

“Now fortunately, because Omar is a very, very decent individual, there are guards who look out for him, and he’s able to relate to the other prisoners in a way that he’s not in as much danger.” 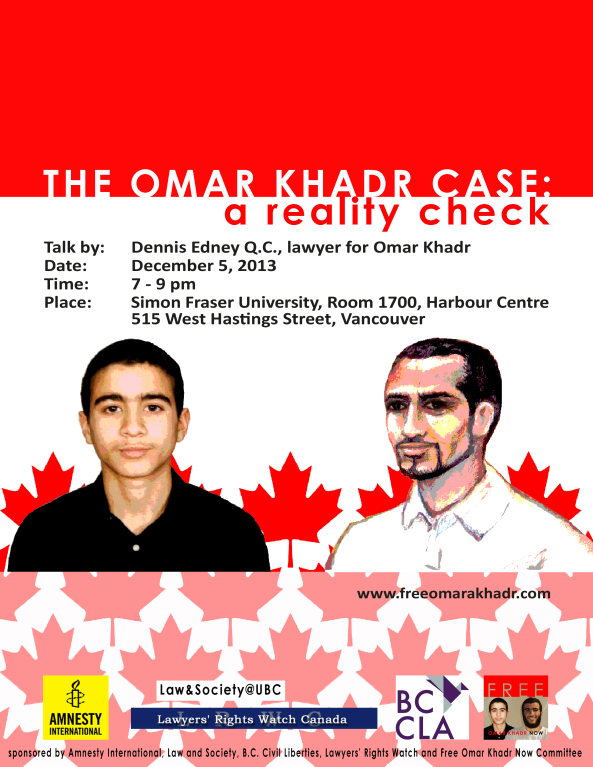 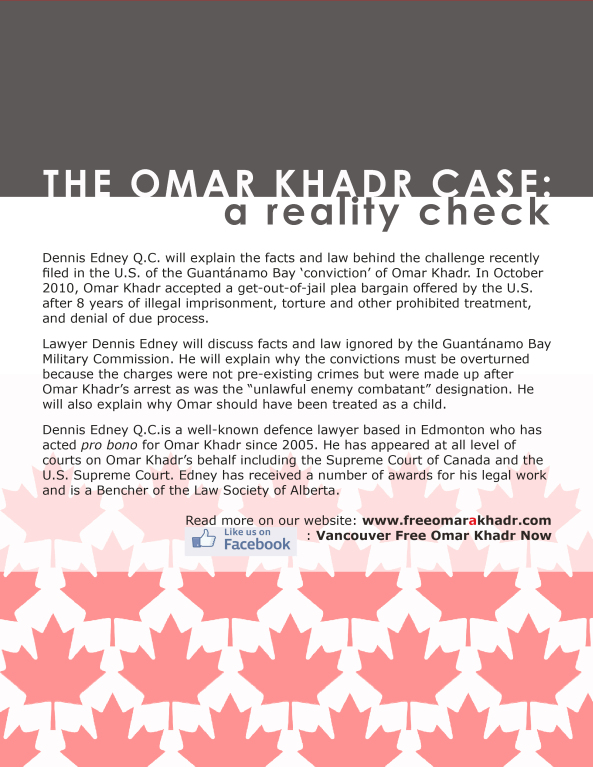