Khadr took part in a 20 minute long question and answer session following the film, which included prolonged standing ovations for the Edneys and for Khadr.

When asked how he managed to survive spending almost half his life incarerated, Khadr said he dealt the pain as it came, not allowing it to fester inside himself.

“I stopped putting faith in specific things,” he said. “I just looked at general things and one of those things is the goodness in people, and even if I was hurt by a particular person, I knew there was good behind that pain – so that could always help me and it made it easier for me (to live with it).”

Dennis Edney Q.C., has spent more than a decade advocating on behalf of Omar Khadr, the youngest prisoner and last Western national to be released from Guantanamo Bay Prison. Omar, a 15 year old Canadian citizen at the time of his capture by U.S. forces in Afghanistan, also holds the dubious distinction of being the first person to be prosecuted by a military commission for purported war crimes he is claimed to have committed while still a child.

Mr. Edney’s legal victories (alongside co-counsel Nate Whitling) include: Omar’s repatriation back to Canada, three successful Supreme Court of Canada judgments regarding the violation of Omar’s legal rights, and more recently securing Omar’s release on bail while his Military Commission convictions are appealed in the United States. Mr. Edney and Mr. Whitling have defended Omar on a largely pro bono basis, reaching into their own pockets to represent Omar.

It seems only fitting that Mr. Edney, a Scottish soccer player turned lawyer, would be described as a thorn in the side of the Canadian government, which has continued to maintain that Omar is a dangerous terrorist. In contrast, Mr. Edney has remained steadfast that Omar is a victim of a system created in Guantanamo Bay to justify the use of torture, extensive human rights violations, secret evidence and illegal trials. He maintains that the Canadian government has being complicit in the systematic and flagrant abuses on one of its own citizens by failing to demand that the United States adhere to international laws.

A campaign has been launched to raise the funds necessary to bring Mr. Edney to McGill University’s Law Faculty, located at 3644 Peel on October 21, 2015. His talk will focus on the rule of law in an age of fear: how the post 9/11 climate of fear and insecurity has been exploited to justify long standing human rights violations carried out in the name of national security. This has led to an intense debate over where the balance lies between the rule of law, human rights and civil liberties on the one hand and security on the other. It is Mr. Edney’s position that if we do not get the balance right, we can fall into lawlessness. One has to look no further than Guantanamo Bay.

Mr. Edney has received a number of awards and distinctions including the National Pro Bono Award (2008), the Lieutenant Governor of British Columbia’s Human Rights Medal (2009), the Gerald L. Gall award by the John Humphrey Centre for Peace and Human Rights (2013), the Winnipeg Citizens Award (2014), the Rotary Club of Canada’s Paul Harris Fellowship (2014) and most recently a place among Canada’s 25 Most Influential Lawyers by Canadian Lawyer in Criminal/ Human Rights Law (2015).

Should you wish to contribute to this campaign and/or attend the event please go to our Go Fund Me Page to find out more. Any funds collected over and above the necessary expenses for Mr. Edney visit will go entirely to Omar’s legal fund.

Ever wondered if the Canadian government is watching you? Curious what powers they’ve recently bestowed upon themselves? What does it mean for Indigenous sovereignty, pipeline resistance, Palestinian solidarity, and other forms of “radical” activism?

Bill C-51, the Anti-Terrorism Act 2015, includes expanded surveillance and intelligence sharing, a re-modelling of the Canadian no-fly regime in the US mode, expands the extraordinary powers of preventative detention and fundamentally redefines the role of the Canadian Security Intelligence Service.

Bill C-24, the new Citizenship Act, creates a two-tiered citizenship regime that limits the citizenship rights of dual nationals who may have their Canadian citizenship revoked if they are convicted of certain serious crimes in Canada or abroad; it also allows for citizenship to be revoked if a naturalized Canadian decides to study, accept a job or move in with a romantic partner outside of Canada.

This talk will discuss key aspects of these new laws and how they are being challenged.

The talk will be presented by Micheal Vonn of the BC Civil Liberties Association.

ASL interpretation will be provided at this event.

This event is organized in partnership with SFPIRG, the Free Omar Khadr Now Campaign and the Seriously Free Speech Committee.

The night before his 29th birthday Omar can finally say farewell to persistent reminders that he is not a free man.

Justice June Ross of the Alberta Court of Queen’s Bench ruled on Friday September 18 that Omar can remove the electronic bracelet he has been wearing since his release from prison on May 7 this year, and that he is allowed to visit his family in Toronto.

She said that the conditions imposed on Omar were “unusually restrictive.”

The judge told Omar that when he will visit his grandparents in Toronto this fall, he must be joined by his lawyer and he has to meet with the authorities there.

Last week, Ross had already lifted Omar’s strict curfew conditions to make it possible for him to attend evening classes to become an emergency medical technician.

Before lifting many of the restrictions, the judge consulted with Omar’s bail supervisor who reported that Omar had met all his bail conditions up to now.

This was the deciding factor in the judge’s positive ruling on September 18. 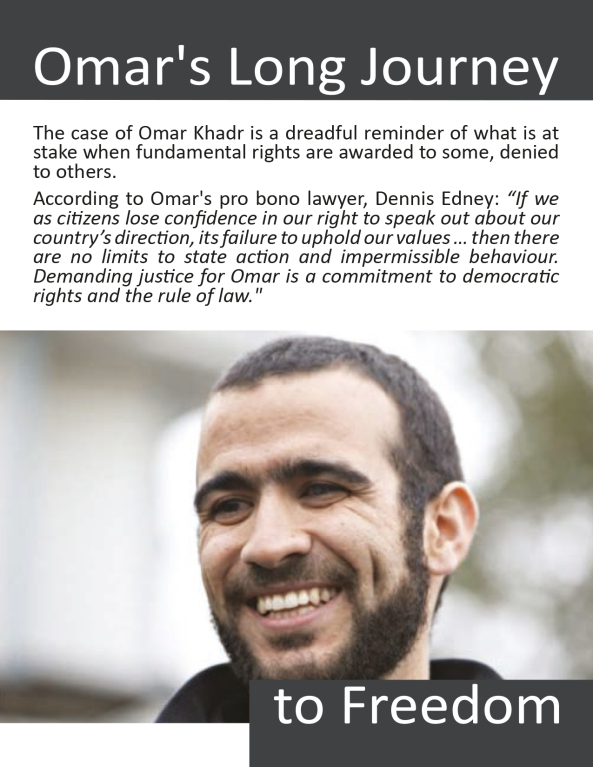 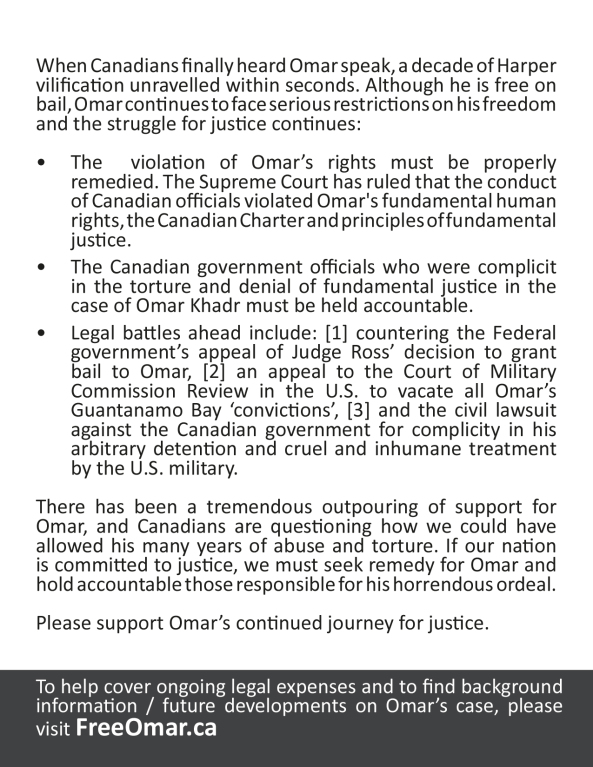 Congratulations to Omar and his lawyers!

Omar attended court today with two friends and took a seat in the front row. He listened to his two long time lawyers, Dennis Edney and Nate Whitling, who explained why their client wants his strict bail conditions changed.

Dennis Edney, one of Omar’s pro bono lawyers, said outside the Edmonton courtroom: “It allows Mr. Khadr to fully progress in some of the educational programs he’s attending. Night classes finish at 10 (p.m.). He would have to leave a night class earlier to satisfy the present curfew. Now the court is allowing him to be able to attend the night class and completely finish it, then make his way home in reasonable time.”

“Omar’s transition to life in freedom has been going great,” said Dennis Edney earlier this week. “Omar has been stopped by so many people in Edmonton who simply have said ‘welcome’”.

The judge has reserved her decision on Omar’s request to be able to visit his family and remove the monitoring bracelet.

For that Omar will be back in court next Friday.

Watch G&M video interview with Dennis Edney and Omar Khadr outside the courtroom.

Omar’s pro bono lawyers, Dennis Edney and Nate Whitling, are in court today to argue for ease in his strict bail conditions.

Omar was finally granted bail on May 7, 2020 and tasted freedom for the first time in almost 13 years. In an affidavit, Omar says that re-entry has been “going great” and, “I have been embraced by many members of the community and made many new friends.” However, the ankle bracelet - a perpetual reminder that he is not a free man - which is part of his bail condition has caused him embarrassment (naturally) in public when it went off by itself.

Lawyers for Omar Khadr in court to argue for ease in bail conditions
The Canadian Press
September 11, 2020
http://www.ctvnews.ca/canada/lawyers-for-omar-khadr-in-court-to-argue-for-ease-in-bail-conditions-1.2557953