Thank you to Omar’s teacher, the wonderful Arlette Zinck!

Muna Abougoush:
“The rooms were packed with supporters wearing pins and holding signs and there wasn’t one person in opposition to Omar. He walked into the courtroom and all of the people were in shock and some cried and cried. He smiled at all of the people who were there. It was a long day in and out of the courtroom for hours. Every once and a while Omar would glance over and I would smile and make a face at him. He was so happy to see all these people just for him. At the end of the day he got up to leave the courtroom and everyone cheered for him and I really think it lifted his spirits. I think it was one of the best moments I have ever witnessed.”

Live tweets from Heather Marsh @GeorgieBC:
- 120 supporters this morning for Omar ‪Khadr plus overflow room with livestream. Saw only supporters, by orange ribbons, conversation. - Very diverse crowd supporting Omar ‪Khadr, every age etc. All different universities, high school, seniors. On Monday with midterms next week. -
- Very visible warmth from Omar ‪Khadr to his long time lawyers Dennis Edney and Nate Whitling. Also seems pleased to see Canadian crowd. - Omar ‪Khadr is not the hulking brooding figure from Guantanamo sketches or a broken child. Very composed, warm, personable appearance. - People talking about serenity of Omar ‪Khadr’s features / expression. Expecting dull or anguished, got neither. - Omar Khadr told a correspondent a couple days ago this was his first time in a “real court”. Seemed very happy today.   - I gave Omar Khadr a thumbs up and a peace sign early on because I wanted to see the smile again. Worked. Dimples.   - A live aired interview with Omar ‪Khadr is obviously his enemy’s worst nightmare. With very good reason. Will surprise most. -
- Judge says no discretion needs be applied in this case. Will not announce decision today. Judge left, supporters shouted to Omar ‪Khadr, “nice job”, waved as he left. -
- It is time for a class action against this government. These are not just Omar ‪Khadr’s rights on trial, he is the canary for us all.   -
- I gave Dennis a hug and said thanks for all of you, Canada. You are welcome. -
- Thinking about Omar ‪Khadr now and how happy he looked to be in a room of Canadian people. And how mutual it felt. 11 1/2 years. -

Helen Sadowski:
“Omar Khadr’s day in court was quite a day! About 100-120 spectators throughout the day, mostly his supporters, sat on court benches, tightly squeezed together. A second court room with video/audio feed was set up to deal with the overflow of people. Many journalists were there including Michelle Shepard from the Toronto Star who covered the military tribunals in Guantanamo and wrote the book Guantanamo’s Child. She was accompanied by Peter Raymont, the well known Canadian documentary filmmaker who is contemplating doing Omar’s story.
Omar was quietly brought in and it was only when I turned my head that I saw him. He sat perfectly still against the wall and then burst into great smiles when his lawyer came to talk with him. He was also smiling broadly at all of his supporters who smiled back.
Really the first time in his life to be in a real court.
We all couldn’t help remarking how very striking he is, handsome face and just very serene in his posture. After all he has been through, torture, a “human mop”, kangaroo court, blinded in one eye etc, its pretty amazing that he can flash the smiles he does to people. That standard Omar sketch which makes him look like a sinister and swarthy 45year old is just so wrong and inaccurate.”
The court challenge is full of legal technicalities and no decision was rendered yesterday. His lawyer Dennis Edney (pro bono [+] Donate to Help Free Omar Khadr) did a great job.
Harper made strong statements against Khadr yesterday in the press and Edney spoke about this interference of the judicial system by the Prime Minister as a dangerous occurrence. What is important now for all Canadians is respect for the rule of law and equal treatment of all Canadian citizens before the law. History is in the making and we need to think of the legacy this case will leave for the future.”

Robert Betty:
“We succeeded in our goal of standing in solidarity with Omar and we all saw the smile we put on his face! You’ve gotta love a kid who can endure all he has been through and still flash a smile like that! If that had been all we had accomplished it would have been a great day.
But we also presented to the media and to all Canadians a diverse group of intelligent citizens who care about Omar, care about Canada, and care about the rule of law. Those who would like to cast Omar supporters as naive or scary had better go to a desert island for the next couple of days because the Orange Ribbon Brigade has filled the airwaves, the newspaper, the twittersphere…”

Dennis Edney, Omar’s lawyer:
“Canadians should be concerned with the interference of our government in the judicial system. This is not about guilt or innocence, it’s about where he gets placed. … Omar Khadr was eligible for full parole in July but hasn’t applied, because he hasn’t got a chance. He has been so isolated, he hasn’t been eligible for prison programs. And that’s what he needs in order for the parole board to release him. If Omar Khadr continues to be labelled as a maximum security inmate, he’ll never get out. … This government is running out the clock on him for the next five years.”

Today is a big day for Omar Khadr; finally in a Canadian court. If you are planning to attend, consider joining us as we make a joint show of support for Omar. Details on this event page:
https://www.facebook.com/events/513661908702777/

Although Omar grew up in the hell named Guantanamo, fortunately he preserved his beautiful character. Anyone who has the privilege to know him, agrees that he is a wonderful individual.

Will he finally see justice after 12 long years of torture and unlawful imprisonment? 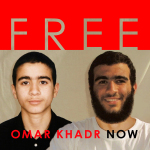 September is an important month for the Omar Khadr file.

Today is Omar Khadr’s twenty-seventh birthday. He has been incarcerated since he was 15.

September 29 marks the first anniversary of Omar Khadr’s repatriation to Canada after 10 years in Guantánamo and Bagram. He spent his first nine months in the Millhaven maximum-security prison before being transferred in May to another maximum security institution in Edmonton. He has spent most of the year in solitary confinement as he has for the past 11 years.

On September 23, Dennis Edney, Omar Khadr’s lawyer will be in an Edmonton court arguing Omar Khadr should be released from maximum-security prison into a provincial institute because as a young offender he cannot legally be detained in a maximum-security prison. A rally under the banner of “Omar Khadr is welcome here” is scheduled at 8:30 am in front of the Law Courts on Sir Winston Churchill Square.

Edney has support from Ivan Zinger, Canada’s prisoner ombudsman, who says that Khadr is not a maximum security threat and that there is no evidence of problematic behavior on Khadr’s part.

“Even the Americans classified Khadr as a minimum security risk,” said Zinger in a letter to Corrections Services Canada, recently released by Canadian Press.

Edney’s application is being vigorously opposed by the Conservative government who spokesperson Steve Blaney continues to refer to Kader as the “convicted terrorist.”

On September 12, in an open letter to the community, a group of British Columbia activists launched a Canada-wide campaign to raise $20,000 to help pay Omar Khadr’s legal expenses.

Peter Golden, a Victoria human rights lawyer and one of the initiators of the campaign stated: “This is a human rights issue. Omar Khadr was a 15 year old child when he was captured and he continues to languish in jail 11 years later.”

According to another campaign sponsor, Gary Caroline, a Vancouver labour and human rights lawyer: “Dennis will still be providing free legal representation to Omar but your financial contribution will let them both know they are not fighting this alone.”

You can read the open letter and access information on the fundraising campaign here. 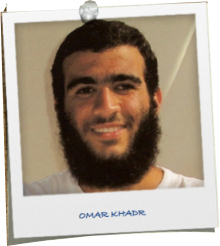 Today, Omar turns 27. On 23rd Sept, it is his first court hearing since the sham trial in Guantanamo. Dennis Edney, Omar’s lawyer, is arguing in court that as Omar was a ‘young offender’ when incarcerated, he should not be in maximum security prison in Canada right now but provincial prison instead (this way, Omar will be eligible for parole). We need to give Dennis as much support as possible — needless to say, Omar needs our support desperately — and so we are doing a TWITTERSTORM today.

Here are the tweets you can COPY/PASTE (not retweet) when twitterstorm starts: http://pastebin.com/mJQpRdVm

We need a few minutes of your time to participate in this, please. Spread the word. Thank you. 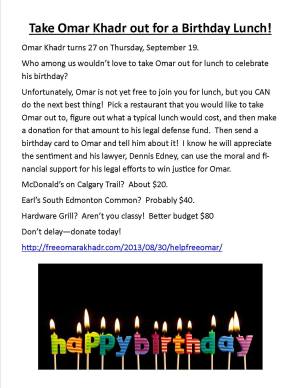 Last year on his birthday, Omar got visited by Canadian officials in Guantanamo Bay, because he would be repatriated in 10 days time. Being back in Canada hasn’t been easy, the nightmare continues. September 29, 2013, will be the one year anniversary of Omar Khadr’s repatriation from Guantanamo Bay. He remains incarcerated in maximum security prison in Edmonton Institution and his rights remain violated.

Omar’s birthday-week is again a milestone-week. Dennis Edney, Omar’s lawyer filed a brief in an Edmonton court. He is seeking to have Omar transferred from maximum security to a medium-security provincial jail. He also hopes that, for the first time, Omar Khadr will get his day in an open court. That we shall witness on September 23.