The unacceptable government interference in the case of Omar Khadr first came to surface in 2009 when the Supreme Court of Canada ruled that the Canadian government was responsible for the violations of Omar Khadr’s rights under Article 7 of the Charter of Rights and Freedoms.

Many Canadians clearly understand that Omar Khadr is wrongly imprisoned, as also this recent tweet indicates :

“When people say “Omar Khadr is a terrorist, etc” then I know they’re ignorant (or sadistic) without too much examining.”

And again today, the Government of Canada is criticized, from three different angles, for their continuing interference and the unjustified detention of Omar Khadr:

1) Why is Omar Khadr still in jail? - Kathy Copps for Rabble.ca

Do tortured child soldiers belong in Canadian prisons? The fact that Omar Khadr has spent 4254 days in prison, 537 of those days in Canadian detention, should make every Canadian question the essence of our humanity and respect for the rule of law.

Omar’s recent transfer from a maximum to a medium-security prison is a hopeful indication that Correctional Service Canada (C.S.C.) is making decisions independent of prejudicial government pressure, but we have to ask ourselves why Omar is still in jail? Unfortunately for Omar, political interference in the judicial process has a disturbing history, and since his repatriation the intervention of right-wing, Islamophobic government officials, foreshadowed an unjust delay or even a complete denial of his freedom.

Canadian correctional authorities have unfairly classified former Guantanamo detainee Omar Khadr even though they lowered his risk rating from maximum to medium security, the federal prisons ombudsman complains. The Office of the Correctional Investigator urges prison authorities to take into account evidence that Khadr poses minimal threat and should be classified as such.

“(Correctional Service of Canada) officials also note that there is no evidence Mr. Khadr has maintained an association with any terrorist organization,” the letter to CSC’s senior deputy commissioner states. “It is well documented by CSC officials that Mr. Khadr is fully engaged in his correctional plan and he has actively developed a strong, pro-social network of support since his incarceration.”

We are writing to express Amnesty International’s ongoing concern that numerous, serious human rights matters remain unresolved in Omar Khadr’s case, in both Canada and the United States. A substantial amount of time has passed in his case.  It has been more than eleven years since Mr. Khadr was taken into US custody in July 2002.  It has been over four years since the second of two important Supreme Court of Canada rulings in his favour.  And it has been almost eighteen months since Mr. Khadr was transferred to Canada to serve the balance of his sentence.  It is time to resolve the outstanding human rights concerns.

As such, we urge the Canadian government to take steps to ensure full and proper review and resolution of the outstanding human rights concerns and related legal matters in Mr. Khadr’s case.  Specifically, we call on the government to appoint a sitting or retired judge and provide him or her with a mandate to examine the range of outstanding human rights and other legal concerns in Omar Khadr’s case and make recommendations to the government as to how those concerns should be resolved. 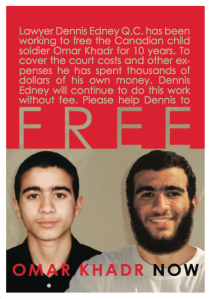 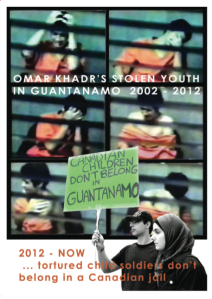 Wednesday 12 March
- Omar Khadr and the Betrayal of International Law: a public meeting with Dennis Edney, chaired by Professor Bill Bowring at Garden Court Chambers, London. Organised by CAMPACC, the Haldane Society of Socialist Lawyers and the London Guantánamo Campaign.

Friday 14 March
- An audience with Dennis Edney QC, chaired by Dr Douglas Guilfoyle at the UCL Faculty of Laws.

and
- Where is the Law in War? An Analysis of Omar Khadr’s case. Organised by the Westminster Law Review.

Monday 17 March
- Afternoon lecture with Dennis Edney at Birkbeck College, University of London. Organised by a coalition of student societies. 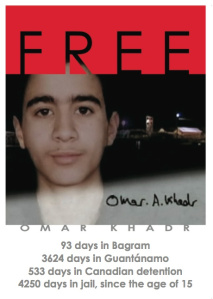 and
- Dennis Edney talk on Omar Khadr at the Veterans for Peace UK event.

and
- Amnesty International event with Talks from: Dennis Edney, Aaf Post and Andy Worthington about Omar Khadr at the Human Rights Action Centre.

Last Friday, February 7, Omar Khadr was moved to the medium-security prison, Bowden Institution and Annex. The transfer is a step closer to justice and freedom, as he can finally earn his parole that allows his reintegration into society. Many Canadians are pleased that the placement in the new prison will allow Omar to access programs and services. However, it doesn’t alleviate the fact that Omar’s imprisonment is an abuse of human rights and the rule of law.

Dennis Edney, Omar’s lawyer, said, “My position is similar to that of the Ombudsman’s office: he should be classified as minimum and released.”

Prison classification
The Canadian government reluctantly transferred Omar from Guantanamo to Canada in September 2012. While every other Western nation released their citizens upon transfer from Guantanamo, Omar was immediately incarcerated in a maximum-security jail in his native country. Canada insisted in his imprisonment under harsh conditions.

That placement was firmly criticized by The Office of the Correctional Investigator (OCI): “The OCI has not found any evidence that Mr. Khadr’s behaviour while incarcerated has been problematic and that he could not be safely managed at a lower security level. I recommend that Mr. Khadr’s security classification be reassessed taking into account all available information and the actual level of risk posed by the offender, bearing in mind his sole offence was committed when he was a minor.”

Omar Khadr was classified as minimum security in Guantanamo. The OCI further noted that “according to a psychological report on file, Omar Khadr interacted well with others and did not present with violent or extremist attitudes”.