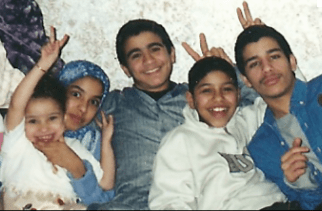 Omar Khadr (centre in the picture) was born in Toronto, Canada on September 19, 1986. His father was an Egyptian born Canadian who ran charities to provide food and education for orphans, and was an old friend of Osama Bin Laden. His mother was a Canadian of Palestinian descent. Omar spoke four languages fluently. When he was 15, his family sent him to accompany a group as a translator. The US military identified that group as Al Qaeda.

In July 2002, US Special Forces attacked the camp where he was staying. When US military entered the site, Omar was buried face down under rubble, blinded by shrapnel and crippled. Another man was beside him. US military documents say a US militant stood on top of Omar’s body before realizing that someone was buried beneath. The first US fighter to arrive on the scene shot the man beside Omar dead and then shot Omar twice in the back, leaving two large exit wounds in his chest and chunks of his chest and shoulder … blown out. He was somehow identified as being the son of his father, either before or after a second US militant prevented the first from shooting him again. He was consequently captured instead.

During the attack on the camp, a US special forces soldier was wounded and later died. There is evidence from forensic analysis of his wounds that he was killed by a US grenade, which the camp did not have, and US military was throwing grenades into the compound at the time of his injury. The US military rewrote the initial report of Omar’s capture to make it look as though he had thrown the grenade, possibly to defend their actions in shooting a shrapnel wounded and buried fifteen year old in the back.

From Lawyers Rights Watch Canada: February also saw the accidental release of a five-page “OC-1” witness report to reporters, which revealed that Omar had not been the only survivor in the compound, as previously claimed, and that nobody had seen him throw the grenade. Officials insisted that the reporters all had to return their copies of the document or face expulsion from the hearings, but after a 90-minute standoff between reporters and military officials, it was agreed that they could retain their copies of the report, but had to redact three names from the report. In March, Kuebler insisted that “Lt. Col. W.” had initially written in his report the day after the firefight that “the person who threw a grenade that killed Sgt. 1st Class Christopher J. Speer also died in the firefight”, implying that the grenade had indeed been thrown by the surviving Mujahideen, and not by Omar. The report was rewritten months later to say that the grenade thrower had been “engaged”, rather than “killed”, changing the wording that exonerated Omar.

He was taken to Bagram torture camp where he was unconscious for about one week. “Interrogations” began as soon as he regained consciousness, and while he was on on a stretcher for the first two weeks to a month. According to his affidavit statement, of February 22, 2008, he was “not right and was out of my wits for about three days. I was in extreme pain and my pain was all I could focus on. … During the first three days, they would shackle my feet and hands out to my sides with handcuffs when they did not like the answers I was giving to the questions. Due to my injuries, this caused me great pain. At least two of the interrogations during these first three days occurred when I was shackled by my hands and feet and in pain. I was unable to even stand at this time, so I was not a threat, and I could tell that this treatment was for punishment and to make me answer questions and give them the answers they wanted. … During the interrogations, the pain was taking my thoughts away. After I regained consciousness after being unconscious for a week, the first soldier told me that I had killed an American with a hand grenade. They would only give me pain medication at nighttime but the interrogations occurred during the daytime.”

A torturer present at all of his Bagram ‘interrogations’ was a man named Joshua Klaus, who was convicted of his role in killing two other prisoners at Bagram, Dilawar and Mullah Habibullah in December of 2002. Omar wrote that Klaus “would often scream at me if I did not give him the answers he wanted. Several times, he forced me to sit up on my stretcher, which caused me great pain due to my injuries. He did this several times to get me to answer his questions and give him the answers he wanted. It was clear that he was making me sit up because he knew that it hurt and he wanted me to answer questions. I cried several times during the interrogation as a result of this treatment and pain. During this interrogation, the more I answered the questions and the more I gave him the answers he wanted, the less pain was inflicted on me. I figured out right away that I would simply tell them whatever I thought they wanted to hear in order to keep them from causing me such pain.”

Also from his affidavit:

The picture below shows the condition Omar was in when he arrived at Bagram. 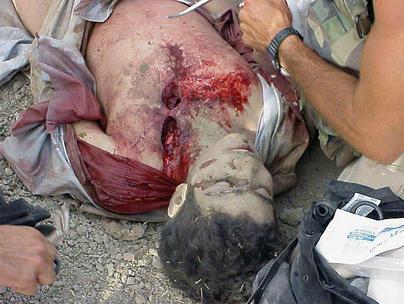 Not only was Omar given no consideration for his age, he was “treated worse than anyone else” according to cellmate Moazzem Begg. Australian prisoner David Hicks wrote, “On one occasion, I saw US soldiers dragging Omar from his cage to a room used for interrogation just opposite from mine. For at least an hour, I heard him scream and yell in pain as they abused him. Omar was yelling, ‘Why are you doing this? … Please stop. … Somebody help me!’ There seemed to be no point to this brutality except to hurt him and break his will.” He was also reportedly drugged, subjected to extreme temperatures for long periods, and refused basic medical treatment including the removal of shrapnel from his wounds.

Besides being in contravention of the Optional Protocol to the Convention on the Rights of the Child on the involvement of children in armed conflict, which both Canada and the United States have signed and ratified, Omar’s treatment is completely contrary to the US government’s own recommendations for the treatment of minors at Guantanamo, on every single point.

Here is Omar’s story as explained by Dennis Edney of his Canadian defense team. He explains not just the circumstances of Omar’s abduction and imprisonment, but also who Omar is today. Although the quote in the title of this article is from the video below, it is echoed by similar statements from almost everyone who has spoken to Omar throughout his confinement, defense attorneys (both currently employed and fired), psychiatrists, cellmates, and guards.

Resources for information on Omar Khadr