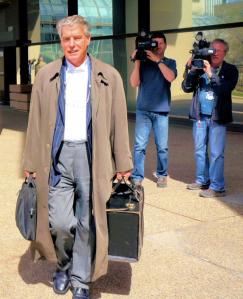 Omar Khadr appeared in Alberta Court of Appeal today. His lawyer Dennis Edney wants him to be released from a federal prison because he was a juvenile. The federal lawyers claim adult sentences for four of the five crimes where the US accused him of as a 15-year-old and where he had to plead guilty to, in a Guantanamo military court in 2010. (A court that is internationally not recognized.)

“Federal lawyer Bruce Hughson told the appeal court judges that Khadr was given a sentence of five concurrent eight-year terms for each conviction by the U.S. military. Four of those five convictions are adult sentences, therefore he should stay in the federal system.
Both Chief Justice Catherine Fraser and Appeal Court Justice Jack Watson repeatedly challenged that view, noting that expert evidence shows that the U.S. military commission did not hand out separate sentences for each crime but only a single “global” sentence.”

Looks like the federal lawyers were left making stuff up to explain why Omar was put in a maximum federal penitentiary.

Wednesday April 30, 2020 @ 9:30am Omar Khadr will be appearing in the Court of Queen’s Bench in Edmonton for an appeal hearing. Please try to make it out to show your support.
Dennis Edney, lawyer for Omar Khadr is set to appeal the decision that denied his request to be transferred out of Edmonton’s federal penitentiary into a provincial facility. The case will be heard by the Alberta Court of Appeal. Edney has argued that his detention in a Edmonton maximum security institution was illegal because he was 15 when the crimes were committed, and his eight-year sentence amounts to a youth sentence in provincial jail.
https://www.facebook.com/events/230698490461591/?ref_dashboard_filter=upcoming

Recently every Canadian MP and Senator received this letter [ > Omar Khadr and the Rule of Law ] from the Free Omar Khadr Now Campaign.

As a follow-up, the group is urging all Canadians who value justice and the rule of law to take action. Please voice your concern for the ongoing violation of Omar’s legal and human rights and ask your MPs to Take a Stand:

See http://www.parl.gc.ca/Parliamentarians/en/constituencies for MP’s email, phone and mailing info. No postage is required for letters to MPs.

And if you can do more: