Omar Khadr made his first appearance in a Canadian court on Monday. After an 11-year journey from Afghanistan to Guantánamo Bay to Canada’s Millhaven Institution, the Toronto-born man is now in Edmonton’s federal prison. He was 15 when he was captured and tortured at Bagram. He turned 27 last Thursday.

If you’re not familiar with the case it goes loosely as follows: When the Americans first arrested Omar in Afghanistan, he was accused of throwing a grenade that killed an American solider. For eight years he maintained his innocence, until he signed a plea deal in 2010 that got him out of Guantánamo. Omar was then convicted of five counts of war crimes for his actions, which were not recognized as such anywhere else in the world including Canada.

Omar’s case is complex. While the American solider he is accused of killing certainly died from a grenade, there is no evidence showing that Omar ever threw one. And while Omar confessed to these crimes, it was after eight years of torture—and given his option to either insist upon his innocence and stay in Gitmo or confess to the crimes and see a judge in Canada, the context of his confession was problematic at best.

The Canadian Supreme Court has even ruled that that Omar’s right were violated, but left the remedy up to the government of Prime Minister Stephen Harper, who of course declined to provide any solution.

Harper himself has been making strong statements about the trial in an apparent attempt to influence the court proceedings—he’s said that “It is very important that we continue to vigorously defend against any attempts, in court, to lessen his punishment for these heinous acts.”

Omar’s counsel, Dennis Edney, argued that he should be transferred to a provincial prison from a federal institution due to his age when the alleged crimes took place. In a confusing instance of legal doublespeak, the Crown’s prosecutors are arguing that Omar has not really been sentenced to eight years, but rather to five eight-year sentences served at the same time. Associate Chief Justice J.D. Rook has reserved judgment to a currently undetermined future date. 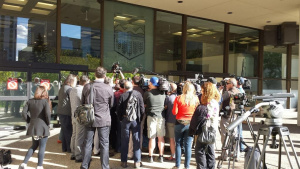 Heather Marsh, a journalist who has followed Omar’s case closely, was in court on Monday and wrote about it for us.

The media swarming Khadr’s lawyer outside of Monday’s hearing. Photo by the author

The court was filled with what seemed to be Omar’s supporters. Many were wearing orange or orange ribbons and I spoke to several of them. There was a high schooler who said she was done with classes for the day, students from several different universities skipping class even though they had exams next week, and people of all ages and ethnic groups. After the media were moved to the jury box and people were encouraged to squeeze together, 120 people were in the courtroom and a live feed was set up for those who had to watch from the overflow room.

A security guard told Omar’s counsel that Omar would be available to talk to them in a private interview room outside—but Edney insisted it was an open court and Omar could appear. After a brief discussion he was allowed to be present.

Omar is an average-sized man with a soccer-player build and a neatly trimmed beard. When he came home last year he wrote to Seger M., an 11-year-old supporter, “I play soccer too, but I don’t think I’m as good as you. I usually play defense or goal keeper.” He looks it, although since he came home he has been almost entirely in solitary confinement and therefore unable to play any sport at all.

Omar wrote to me when he was finally transferred back to Canada last fall, “At least we have a proper legal system,” and he told another correspondent this week that this would be his first appearance in “a real court.” He seemed composed and happy throughout the proceedings, smiling frequently at people. Most of the discussion I overheard during the breaks was regarding his appearance and demeanor, not the legal arguments. Omar and the gallery of supporters seemed equally amazed that they were finally meeting after more than 11 years of hearing about each other.

At one point, a man interrupted proceedings to rip off his shirt and say, “Enough! He was 15!” and object to the endless paper shuffling and statute citing. He was escorted out of the room without being acknowledged by Omar or the rest of the courtroom. There was another spontaneous outburst at the end of the day, after the judge had left and as Omar was being led away—people waved at him and shouted, “Good job, Omar!” and, “Stay strong!”

After the hearing Edney met with the media outside and told them Omar’s chances of parole would be much greater in a provincial institution as he would have access to the programs and the society he needs to rehabilitate himself. “If he remains in a federal penitentiary, where he doesn’t get any programs, where he spends most of his life locked away, where his life was threatened, he’ll never get out,” the lawyer said.

As long as Omar is in federal prison he will probably be in solitary for his protection. As he wrote to a friend last February about Millhaven, “My new place is different definitely. People are generally nice, but with a lot of bad habits. Life here compels you to live like an animal because it is like a jungle. I have to change a little to defend myself, but not lose my humanity and who I am.”

The point was repeatedly made by the prosecution that he could not be released as he had been supposedly “marinated in jihad,” as a psychiatrist’s report said, when he was an inmate of Guantánamo and Bagram during his formative years. The catch-22 continues—he can’t be released in prison because of all the time he’s already spent in prison.

Canada famously violated Omar’s rights by interrogating him for the US when they knew he had been subjected to three weeks of severe sleep deprivation torture and other “softening up” techniques prior to questioning. They also refused for eight years to give him even a pair of glasses to preserve the vision remaining in his one good eye or to provide him with education to help him to rehabilitate himself. After receiving no formal education past elementary school, he recently passed Ontario’s tenth grade high school equivalency exams, scoring higher than 90 percent in all subjects.

Solitary confinement is widely recognized as torture, and many years of studies have shown the permanent mental damage that can result from keeping humans in boxes for years. Omar, however, appears relatively unharmed despite the conditions of his imprisonment. He can even find benefit in the deprivation of experience, education, and companionship. In April he wrote to Aaf Post in the Netherlands, “Usually we don’t appreciate the small things. We take them for granted. Once you lose these things like opening your window in the morning and taking a breath of fresh air or seeing a bird chirping, you really appreciate these things. Even though I’m in prison there are still a lot of small beautiful things around us. Seeing the sun rise or set or to see the snow fall.

“Being back in Canada is, as you said, a wonderful thing. As big or difficult as change may be, it’s worth it. There are too many good things in this life (as hard as it might be) to worry or even care about the bad things. Things are what we make out of them. Prison can be a deprivation of freedom, or a time to enlighten ourselves. For me it is the latter.”

The author would like to thank the Free Omar Khadr group for research assistance.

2 comments on “Omar Khadr War Criminal, Child Soldier… or Neither?”