July 2010, Omar: “I plan to boycott the process. I have my reasons.” He explained those reasons by reading to the court a handwritten statement later distributed to journalists: 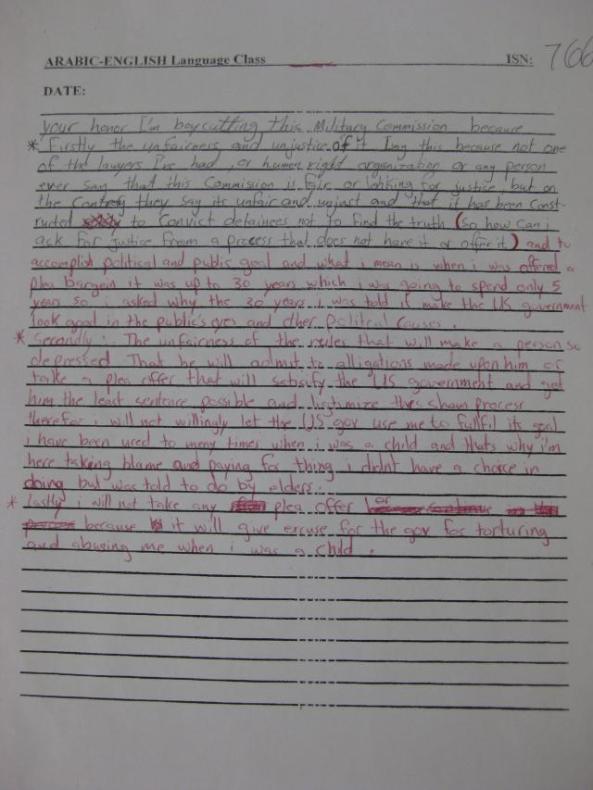 “Your Honor, I’m boycotting this military commission because: firstly, the unfairness and injustice of it. I say this because not one of the lawyers I’ve had, or human rights organizations or any person ever say that this commission is fair or looking for justice, but on the contrary they say it’s unfair and unjust and that it has been constructed to convict detainees not to find the truth (so how can I ask for justice from a process that does not have it or offer it) and to accomplish political and public goal. And what I mean is when I was offered a plea bargain it was up to 30 years which I was going to spend only five years so I asked why the 30 years. I was told it make the US government look good in the public eyes and other political causes. Secondly: The unfairness of the rules that will make a person so depressed that he will admit to alligations [sic] made upon him or take a plea offer that will satisfy the US government and get him the least sentence possible and legitimize this sham process. Therefore I will not willingly let the US gov use me to fulfill its goal. I have been used many times when I was a child and that’s why I’m here taking blame and paying for things I didn’t have a chance in doing but was told to do by elders. Lastly I will not take any plea offer because it will give excuse for the gov for torturing and abusing me when I was a child.”

Parrish apparently did not understand Omar’s statement to boycott this military commission because he assumed Omar’s point was that he wanted to represent himself. He asked, “Have you ever studied the law?”

Omar replied, “This is a military commission. You don’t need to study the law.”

Parrish: “What is your education?”

As if working off a script, Parrish asked, “Have you ever represented yourself or anyone else in this type of proceeding? Are you familiar with the rules of evidence?”

Parrish: “Are you familiar with the rules of the military commissions?”

Omar answered, “In general…. My lawyers are as untrained as I am. No one has any experience in these military commissions.”

Indeed, the new rules implementing the 2009 Military Commissions Act (MCA) had materialized late in the afternoon of April 26, the first day of Omar’s pre-trial hearing.

Adopting a paternal tone, Parrish advised that effective legal representation must be objective and that “representing yourself is never a good idea.”

Parrish: “So are you saying that in this process legal training makes no difference?”

The judge asked if there were any responses from the prosecution. The lead prosecutor, Jeff Groharing, who had been on the Khadr case since the beginning and opted to continue even after he had returned to civilian life, urged the judge to inquire about Khadr’s “possible physical and psychological ailments” and to ask questions “to clarify what about the system the accused thinks is unfair.” Parrish duly asked Khadr, “Do you have any mental or physical issues that would prevent you from making these decisions?”

Omar: “This place is not a five-star hotel, so I’m sure it’s going to have an effect on me. I don’t know.”

In an effort to project an aura of impartiality about motions as yet undecided, Parrish tiptoed around the issue of torture. “After you were captured, you’ve been through a number of things, and this might affect your mental state.” Soon, the judge called a recess in order to deliberate on the issue of representation.

When the court reconvened, Parrish seemed uncertain how to navigate this confounding relationship between a defendant’s rights and the inevitable public relations disaster that would result from prosecuting an unrepresented child soldier for war crimes. Hoping to persuade Khadr to rethink his position, Parrish tried pointing out some of the disadvantages, such as: “If I allow you to represent yourself, you won’t have access to material that’s classified.”

Then, Parrish tried praising the zealous dedication of the lawyers who have worked on Khadr’s case over the years.

Omar: “I’m boycotting and I don’t want any attorneys.”

Parrish asked, “Is part of the boycott that you will represent yourself and not talk?”

Parrish: “If you show up, does that mean you are still boycotting?”

Omar: “I don’t understand. I’m boycotting this whole thing. What’s the point of representing myself?”

Parrish: “So you do not want to represent yourself?”

Parrish: “Then I am not releasing Jackson. He will remain your detailed counsel.”

Omar: “You are forcing him on me. I don’t want him to represent me.”

Parrish seemed satisfied that the representation issue had been resolved.

Parrish also demolished Omar’s torture claims. He found: “There is no credible evidence the accused was ever tortured…even using a liberal interpretation considering the accused’s age.”