Local performer Christine Pilgrim had recently attended an moving talk by Omar Khadr’s lawyer, Dennis Edney. She will talk about the human rights violations endured by Omar and invite those who also believe in the power of the pen to address letters on his behalf.

“Dennis Edney ended his moving talk about Omar Khadr’s situation by saying, ‘The only crime worse than willful inhumanity is the crime of indifference, of silence, of forgetting.’”

Admission to the event is free and open to everyone, from youth to senior. For more information, e-mail [email protected] or call 250-542 4152. 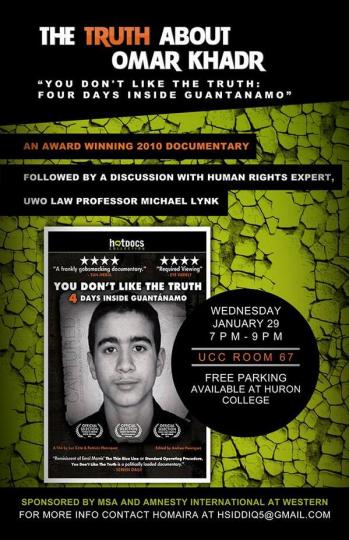 Screening of the documentary “You Don’t Like the Truth: Four Days Inside Guantanamo” followed by human rights discussion with Law Professor Michael Lynk. Come out and discuss the truth about Omar Khadr.

Event is sponsored by MSA and Amnesty International at Western. For more information contact Homaira at [email protected]com

Amnesty International - U of A Chapter organizes “The Friend I’ve Never Met” as a part of University of Alberta’s International Week.

Human rights advocacy work has an emotional impact, both on those who benefit from advocacy and on those who perform it. We will explore the connection between social justice work, solidarity and mental health with panelists such as Dennis Edney, defence lawyer for Omar Khadr, and Dr. Arlette Zinck, educator and advocate for Omar Khadr. Each panelist will share their experience and how their life and sense of community waschanged. A question and answer period will follow.

Please bring your friends, come listen to some new perspectives and join in on the conversation! Following the event, there will be a reception featuring student groups tabling about their advocacy work and refreshments!!!

Like Loading...
Free Omar Khadr Now committee member, Helen Sadowski, contacted Tory MP, Laurie Hawn, in November 2013, informing him about the facts of Omar’s case and asking when will his government stop using Omar Khadr as a political scapegoat to win votes. She invited him to hear Omar’s U.S. Dept. of Defense lawyer, Sam Morison, speak about the appeal to overturn all of Khadr’s convictions at Kings College University in Edmonton.

The following is MP Hawn’s response:

In our view, Omar Khadr was convicted of a crime by a legitimate judicial process. When he has finished serving his sentence, he will be released and treated like anyone else. There is a bit of a contradiction in your request. At the time, some people were saying that Khadr couldn’t possibly be a soldier, because he was only 15 when he murdered Sgt Speer. A great many Canadians understandably put the Canadian context onto a place like Afghanistan. I have followed that conflict very closely and have been there several times. A 15-year-old in that environment is not like a 15-year-old in Canada. He is effectively an adult and there are many, many Omar Khadrs in Afghanistan and other primitive societies the likes of radical Islamism. I can have sympathy for Khadr growing up in a freely-admitted terrorist family, who took disgraceful advantage of their Canadian connection. But, I don’t agree that he should not pay for what he did, and there are more sides to the story than the one you’ll hear from his lawyers. I also appreciate your concerns on press releases regarding Omar Khadr. I don’t necessarily agree with everything that we do in this regard either. Thank you once again for writing. If there is any other way that my office can be of assistance to you in the future please do not hesitate to contact us.
.
Sincerely,
Laurie Hawn

Our response to Laurie Hawn’s email: