2015 was a moving and happy year for Omar Khadr.
Our final 2015 write up about Clinton’s emails and the 2016 call of human rights groups to the new Liberal government.

Hillary Clinton’s end of 2015 released emails, from the time she was Secretary of State, disclose interesting exchanges on Omar Khadr. They reveal in particular Canada’s shameful role in frustrating Omar’s return to his country of origin.

Clinton had to intervene by reminding Baird, then Canada’s Minister of Foreign Affairs in Harper’s conservative Government, to honour the plea deal they had signed, allowing Omar to finally leave Guantanamo and return to his home country Canada. For 11 years, since age of 15, Canada had abandoned him.

After Clinton’s pressing demand Canada reluctantly repatriated him. There was delight in Clinton’s Office that Omar was being released from the detention center at Guantanamo Bay. Clinton’s emails show the joyful response to the news that the young man had finally been transferred to Canada. 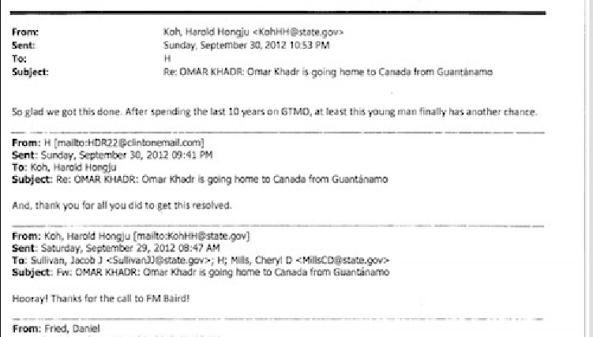 “Thank you for all you did to get this resolved,” then–Secretary of State Clinton wrote in an email to Koh, dated September 29, 2012.

“So glad we got this done,” Koh responded the following day. “After spending the last 10 years on GTMO, at least this young man finally has another chance.”

Every other Western nation had freed their civilians as soon they were repatriated from Guantanamo. In contrary, the Canadian Conservatives were determined to keep Omar behind bars as long as possible. They kept misinforming the public that Omar Khadr was convicted of serious offenses and labelled him as “a terrorist who was a threat to Canadian security”.

Monia Mazigh (International Civil Liberties Monitoring Group), questions in her article about Clinton’s emails: “why this vindictive attitude to prevent a child soldier from getting a “second chance”? Was Canada trying to please its US ally, even though they didn’t want Omar Khadr in Guantanamo prison anymore, or were they rather trying to please their political base and reinforcing their law and order agenda at the expense of Omar Khadr?”

With Omar’s release (on bail) on May 7, 2020 the Canadian public witnessed a decade of vilification by the Canadian government getting unravelled. During a remarkable press conference with Omar that same day, which attracted the world press, he was asked: “Do you have anything to say to Mr. Harper?” He answered, “Well I’m going to have to disappoint him, I’m better than the person he thinks I am.”

Now hopefully, with the Liberal victory in October 2015, an era has ended where governments brutally violate the rule of law for their own political gain.

Justin Trudeau said in 2014, he isn’t ruling out compensation for Omar Khadr for the time he was kept in Guantanamo Bay. “Omar Khadr needs to be treated the way we treat Canadians according to the rules that exist, according to the laws and principles that govern,” said Trudeau, adding that Omar should be treated like “any Canadian who as been incarcerated outside of the country.”

Faithful to his principles, Prime Minister Trudeau instructed the new Justice Minister, Jody Wilson-Raybould, to review the government’s overall legal strategy, including “early decisions to end appeals or positions that are not consistent with our commitments, the Charter or our values.”

This means that Ottawa will be reconsidering its position on Omar’s case and the Federal Liberals may not fight the ruling that released him on bail in May 2015.

With the law on his side, and the Liberal government’s promise to govern accordingly, 2016 will hopefully offer him the option that Hillary Clinton’s Office wished for him: “at least this young man finally has another chance”.

In the past half year, Omar has become a welcome member of the Edmonton community. He thoroughly enjoys life, is ambitious to make up for missed years of schooling and wants to be a productive contributor to Canadian society. He is also studying to be a medical first responder. His difficult journey inspired him to work in the medical field and be there for those in need.

Still Omar’s shameful case is not over and it is closely followed by critics globally and in Canada; “Omar Khadr” was number nine of all googled Canadian names in 2015.

The Canadian government should be held accountable for 13 years of abuse of Omar Khadr’s rights. Lawyers Rights Watch Canada (LRWC) and the International Civil Liberties Monitoring Group (ICLMG) have written a joint report (Dec 21, 2020). They provide their views on the case of Omar Khadr for Canada’s Response to the List of Issues Prior to Reporting (LOIPR) from the UN Committee against Torture regarding compliance with the Convention against Torture.

The Federal Liberals will have much work to do to restore the high standing Canada once had in the field of human rights.

To bring an end to Omar’s ongoing ordeal, it would be prudent for the Canadian government to declare Omar a free citizen, provide him with redress, and hold accountable all government officials who contributed to the violation of Omar’s Charter Rights.

Montreal RIDM Review - Guantanamo’s Child: Omar Khadr - The fine Canadian documentary Guantanamo’s Child Omar Khadr is many things at once – chilling, heartbreaking and heartwarming; a record of shameful behaviour but also one of kindness and dedication; and a testimony to the resilience of the human body and spirit.

Omar Khadr was only 15 years old when he was gravely injured in a firefight in Aghanistan in 2002. That made him a child soldier by definition, though it did not save him from being accused of murder and being imprisoned for 12 years. Read more…

The film Guantanamo’s Child: Omar Khadr will have its première in the next cities at the following dates:

Montreal RIDM Review - Guantanamo’s Child: Omar Khadr - The fine Canadian documentary Guantanamo’s Child Omar Khadr is many things at once – chilling, heartbreaking and heartwarming; a record of shameful behaviour but also one of kindness and dedication; and a testimony to the resilience of the human body and spirit.

Omar Khadr was only 15 years old when he was gravely injured in a firefight in Aghanistan in 2002. That made him a child soldier by definition, though it did not save him from being accused of murder and being imprisoned for 12 years. Read more…

The CBC aired last week, the highly acclaimed and for Canadians unmissable documentary “Omar Khadr: Out of the Shadows”.

>> View it by clicking this link: “Omar Khadr: Out of the Shadows”

(Episode available within Canada only)

Directed by Pat Reed of White Pine Pictures and Toronto Star’s national security reporter, Michelle Shephard, the film was initially broadcast in late May 2015, three weeks following Omar’s release on bail. Promoted by the CBC in the days prior to the May broadcast, but with no advance screeners for critics and reviewers, the film was seen by 650,000 Canadians.

Much has changed since:

After spending nearly half his life incarcerated, Omar is living with Dennis and Patricia Edney and their sons in Edmonton. He’s been welcomed into the Edmonton community, enjoys bike rides and attending King’s College.

The newly elected federal government has indicated it will likely not appeal Omar’s bail ruling.

Leaks of former U.S. Secretary of State Hilary Clinton’s emails reveal how delighted she was when Omar Khadr was released from Guantanamo Bay.

Following screenings at festivals in the USA, Human Rights Film Festivals around the world, and a special screening at the Frontline Club in London, UK, the film will open in theatres across Canada and the USA next year.