On Monday, March 25, Chief Justice Mary Moreau granted me the freedom I have been long awaiting. This decision did not bring an end to my legal battles but it has removed the shadow of indefinite chains from my life. I would like to thank everyone who has stood by me throughout the years.

I would like to give special thanks to Nate Whitling, who has and continues to, tirelessly defend my rights..

I would like to thank the members of the Free Omar Khadr Now group along with the Pour Omar Khadr group who have been a consistent support system for me and also have worked to bring awareness to the facts of my case. In addition, I would like to thank Lawyers Rights Watch for bringing my case forward to the United Nations Committee Against Torture.

I would also like to thank all of my fellow Canadian citizens and people across the world who have taken time out of their day to message me words of support. Your words are like rays of light in the darkness.

photo: Omar Khadr, next to Statue of Ivstitia (Justice) at the Supreme Court of Canada

Omar Khadr’s sentence is finished, Alberta judge rules. He is a free man now, after 17 years of injustice. A huge debt of gratitude to Omar’s lawyer, Nate Whitling, for years of steadfast defense. We also thank all those who have supported our campaign throughout the years. 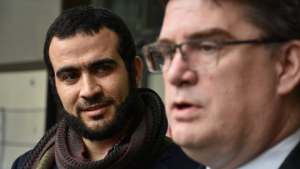 CBC Edmonton made the commendable effort to interview three experts for today’s article on the judge’s decision to end Omar’s sentence <read article here>. Nate Whitling, Omar’s very determined and brilliant lawyer offers his perspective on the case, as does U. of Alberta professor Janice Williamson, editor of Omar Khadr, Oh Canada and member of Free Omar Khadr Now Campaign. Included too, is Audrey Macklin (Professor and Chair in Human Rights Law at U. of T.) who has written extensively on the illegality of Omar’s Guantanamo detention, charges and sentence. How refreshing to hear from those who help the Canadian public appreciate the injustice Omar has faced all these years.

Still left is the US appeal to overturn Omar’s Guantanamo ‘conviction’. The rule of law is strong.

Dear Member of the Media,

Please find attached an updated Factsheet on Omar Khadr prepared by the Free Omar Khadr Now advocacy group. This Factsheet is offered as a media resource in advance of Chief Justice Mary Moreau’s March 25 decision on whether Omar Khadr’s sentence will be expired. We hope the Factsheet will be helpful to journalists new to the story and to others who may have unwittingly incorporated inaccurate facts.

Several errors tend to be repeated in the media.

See, for example: “Omar Khadr pleaded guilty and was convicted of killing Sgt. 1st Class Christopher Speer, an American medic in the U.S. army, with a hand grenade in Afghanistan in 2002, when he was 15.”

The U.S. Military Commission has been discredited internationally - and, in 2008, by the US Supreme Court. These commissions are not properly constituted courts of law and therefore they are unable to legitimately sentence, convict or negotiate guilty pleas. Terms such as “convicted terrorist’, “war criminal” or “murderer” are inaccurate with reference to Omar Khadr.

In her April 2014 ruling, Chief Justice of Alberta Catherine Fraser said: “the evidence against Khadr would have been excluded in a Canadian court. The legal process under which Khadr was held and the evidence elicited from him have been found to have violated both the Charter and international human rights laws.”

The U.S. never charged Omar Khadr with killing a medic, a Geneva Conventions war crime. As Audrey Macklin, law professor and director of The Centre for Criminology and Sociological Studies at the University of Toronto, writes: “Sergeant Speer was not acting as a medic during the battle in which he was killed and he was not rushing to Mr. Khadr’s aid when he died. Not even the U.S. military prosecutors alleged this. Sgt. Speer’s death as a combatant, a tragic loss to his family and his country, was not a war crime.”

For more details of the firefight, you can read the testimony of another Delta Forces soldier who was present at the battle when Sgt Speer died.

The impact of misleading statements about Omar Khadr’s story perpetuates myths and propaganda about his case and misrepresents the rule of law. At this particular moment in history when white supremacist views are mobilized by proliferating groups, the Omar Khadr case can be a particularly charged issue.

Thanks especially to those of you who have worked to cover this long and complex story over many years.

On March 25th Chief Justice Mary Moreau will hand down her decision whether or not the sentence imposed on Omar by the illegitimate Guantanamo process will be expired. Anyone who has followed the 17 years of abuse and injustice Omar has faced, will be anxiously awaiting the news that once again Canadian courts have ruled in his favour.