In helping edit this article, a personal note of deep gratitude to Marlene Cuthbert, who was passionate and completely devoted to seeing justice brought to her friend, Omar, until her last days.
Marlene passed away on March 25, 2015.

I was twenty-five years old when I first saw Omar Khadr’s young face, staring back at me through my laptop screen. The innocence in his big brown eyes combined with the sombre expression drew me in; the straight-backed posture which is typically alien on a teenager confirmed he was staring into the lens of a camera for a passport photo, perhaps being told by the cameraman to remain expressionless, yet the photograph still captured his cheerful disposition. There was a trace of a faint moustache on his baby face, with a hint of a smile in his eyes and mouth. This was a photograph of a young boy, who was barely fourteen years old.

I was completing my final year of Bachelors in English from a Canadian university and had decided to take a course, “Introduction to Law and Justice”, out of curiosity. One of the assignments I was asked to write about was on Omar Khadr’s case, and that is how I came to know about the young man who was to become an integral part of my life eventually. When I scanned the details of his case online, I was overwhelmed by the amount of heavy information revolving around this child. The words Guantanamo Bay, torture, war on terror, indefinite detention combined with the images of hooded men in orange jumpsuits, chained like animals and caged under the blazing sun in Cuba, where the prison is based, confounded me. I knew it was wrong – who wouldn’t be horrified by this abnormal treatment of human beings? – but I couldn’t fully appreciate the gravity of the situation. Even though I was aware of how Muslims had suddenly become targets of racism since 9/11, and END_OF_DOCUMENT_TOKEN_TO_BE_REPLACED

…. Mr. Khadr was not tried in anything resembling a normal, First World legal process. He pleaded guilty under duress: He faced indefinite incarceration without trial unless he pled guilty. The crimes themselves were invented retroactively. The court did not follow normal American domestic or military law, and it denied standard legal protections to the accused, who was a child when he was captured.

“But one thing is clear: Khadr has done more than enough time. He presents no credible threat to Canadian society and should be set free to take up an offer to live with the family of his longtime Edmonton lawyer, attend a Christian university there and rebuild his life”

“Hypocritical blather on Khadr” - Letters to the Editor, Toronto Star

What hypocritical blather from two federal puppets. First, from federal lawyer Bruce Hughson in opposing Omar Khadr’s bail application: “It’s critically important that Canada meet its international obligations” — you mean, by recognizing Khadr’s clear status as a “child soldier” under the UN protocol originally championed by Canada? Or, by formally condemning — it never has — the perversion of international law through torture, abuse and other crimes at Guantanamo, in whose tenure, by way specifically of our off-loading of Khadr, Canada is complicit? Second, from Jeremy Laurin (Minister Steven Blaney’s press conduit): “Omar Khadr pleaded guilty to heinous crimes . . .” — any criminal lawyer with a pulse understands the plea was made to avoid Khadr spending his entire life in either Guantanamo or a U.S. prison. No allegations were ever proven by trial and tested evidence, and there is no legitimate international law providing a charge of “murder” against a soldier in any armed conflict defending himself against an enemy assault.

All stories on the Edmonton Journal’s website that carried news about Omar Khadr’s bail hearing included in the headline “convicted terrorist.” That phrase, so emotionally charged and misleading, should have had a huge asterisk beside it. Omar Khadr was put before a military tribunal that was outside the American legal system and Geneva Conventions. The main evidence against him was a confession obtained through torture and illegal interrogation methods.

It’s time to use another headline.

… Khadr, in blue jeans and a white polo, sat in a box off to the side. He could spot the orange ribbons and friendly faces in the courtroom, thanks to corrective eye surgery last month, repairing his right eye from the shrapnel that blinded his other eye. So when they smiled and waved, he was able to smile and wave back. 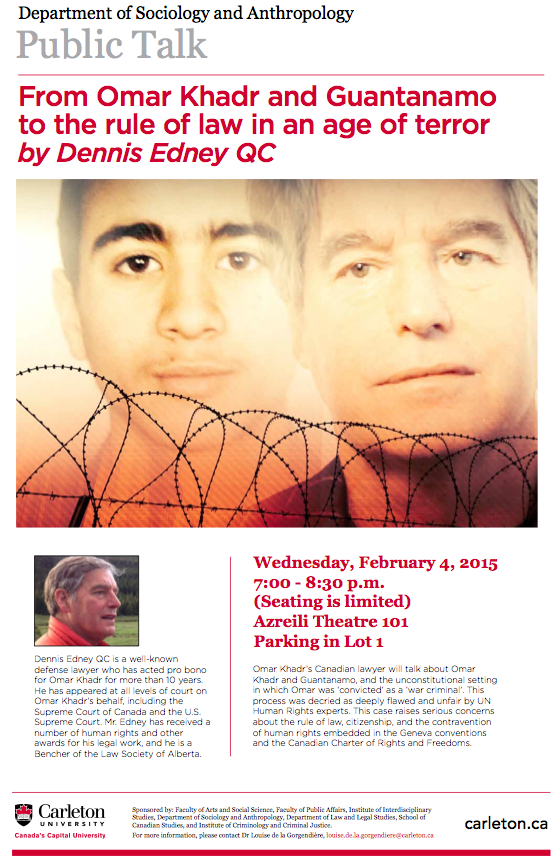