TO CONTRIBUTE TO THE FREE OMAR 2017 FUND, you have the following options:

On May 7, 2015, after a 13 year imprisonment, Omar Khadr was finally freed on bail. His ordeal is far from over.

There are still legal battles ahead. The Free Omar Campaign will continue its work until Omar is completely free to come and go where he wants, and until he is acquitted of all illegitimate charges applied by the widely condemned, extrajudicial Guantanamo military ‘court’. The violation of Omar’s rights must be properly remedied.

We will continue to support Omar’s pro bono lawyers with their mounting costs.

We continue to need your help and ask you to support the Free Omar 2017 Fundraising campaign. The money goes directly to Omar’s defence with no administration fees.

Your contribution makes his defence possible and brings Omar’s case closer to justice.

On the morning of Tuesday, March 24, Omar will be back in court at the Court of Queen’s Bench Alberta. His lawyers will present arguments that, if successful, will lead to his release on bail pending the result of the appeal in the United States of his Guantanamo Military Commission conviction. Public and media interest will be very high and we hope to clearly communicate to Canadians that Omar has strong support within the community from a diverse group of Edmontonians. Please join us at the courthouse on Tuesday morning to get that message across!

08:30 – Assemble at the Three Bananas Café on Churchill Square. We will have Orange Ribbons available for all to show solidarity.
08:55 – Process as a group to the Court of Queen’s Bench.
09:00 – Brief assembly in front of the Court. This is the key media moment.
10:00 – Expected time for the bail hearing to begin. Courtroom # to be determined.

Our key focus is to get the largest possible group out for the Tuesday morning procession and assembly. If we can amass a large number of supporters to fill the courtyard out front, it sends a strong positive message to Canadians who will watch this on the evening news. For those with interest and time, the hearings will probably run all day Tuesday and again on Wednesday. If you are approached by media at this event, there are two key messages we would like to communicate to Canadians:

Please confirm your attendance [via this link] so we can plan to have enough Orange Ribbons ready AND so we can advise the court if an overflow crowd is expected.

For more insight into Omar’s legal odyssey, his journey of life and his personal character see: [Fact Sheet Omar Khadr] 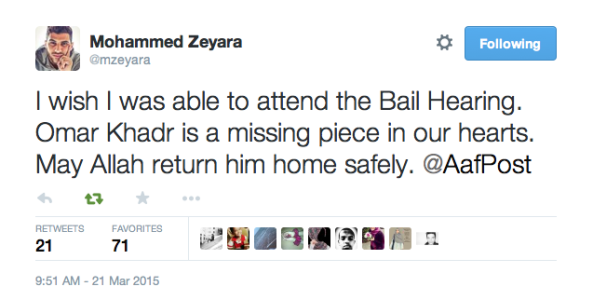 A MESSAGE FROM DENNIS EDNEY Q.C., Lawyer for Omar Khadr | February 2015 Omar is now 28 years old and July 2015 will mark the 13th anniversary of his imprisonment. In 2014 we were successful in persuading the Alberta Court of Appeal that Omar’s U.S. sentence was a juvenile sentence, and therefore he should be transferred to a provincial institution where he can access the benefits of the Youth Criminal Justice Act. The Conservative government appealed the decision of the Alberta Court of Appeal. In doing so, it continued a pattern of challenging every decision favourable to Omar Khadr over the past ten years which resulted in millions of dollars in costs at the expense of the Canadian taxpayer. The Supreme Court will hear the appeal on May 14, 2020.

On March 24 and 25, 2015 a two day bail application will be heard by the Queen’s Bench of Alberta. We are requesting Omar be released pending the outcome of his appeal in the United States. This application is opposed by the Conservative government on the basis Canadian courts lack jurisdiction.

In June 2015, we will be applying for Omar’s parole. We have formally put the warden on notice that he is obligated under the Act to make a security assessment of Omar. Refusal to do so makes Omar’s chances of parole somewhat grim. Both the Corrections ombudsman and Omar’s parole officer have recommended he be classified as a minimum risk. In the event Omar’s parole is denied, we will file for a judicial review of its decision.

In addition to the above work, we continue to publicize Omar’s plight while fighting for his rights within the prison. Omar remains in the Bowden Institution, a medium security prison in Innisfail, Alberta. He is going blind from lack of treatment in Canadian detention. The U.S. attack in 2002 left Omar blind in his left eye and with shrapnel lodged in his right eye. While in U.S. detention he was not provided treatment to save his sight. Now the vision in his right eye is rapidly deteriorating and without treatment, permanent blindness is inevitable. Within days of filing a court application requesting that Omar receive immediate medical treatment for his right eye, we were informed that an appointment had been set up for Omar to see a specialist. We continue to need your help and ask you to support the Free Omar Khadr 2015 fundraising campaign which has a goal of $50,000. This money goes directly to Omar’s defence with no administration fees. Your contribution makes his defence possible.   With warm regards from Omar and myself, Dennis Edney Q.C.

TO CONTRIBUTE TO THE FREE OMAR KHADR NOW 2015 FUND, you have the following options

Canada has “fallen into lawlessness,” says Omar Khadr’s lawyer. And we are all culpable.

At a talk at Carleton University on Feb. 4th 2015, renowned human rights lawyer Dennis Edney gave a call to action against what he described as Canada’s descent beyond the rule of law. The treatment of Omar Khadr by the Canadian government is not only about the torture and abuse of one young

Canadian – as if this were not bad enough. It is also an abuse of our collective rights – and the foundations of our society.

Omar Khadr was imprisoned in Guantanamo Bay at fifteen years old. He spent a decade in Guantanamo before facing the US Military Commission’s spurious kangaroo court process, which allowed evidence obtained under torture and retroactively applied crimes, thus failing the most basic tests of a fair court. The charges themselves were not legally recognized war crimes, but rather were crimes invented by the US government. Yet Canada continues to imprison Khadr based on this process.

Speaking to a full house of students, faculty and members of the public, Edney made an entreaty for Canadians to speak up against the erosion of the rule of law in this country. He spoke, he said, not only as a lawyer, but as a father who had been profoundly changed by what he witnessed at Guantanamo.

Omar Khadr is a native of Toronto and was in Afghanistan with his family in 2002, aged fifteen, when the compound he had been left at by his father was attacked by US forces.

Omar was severely wounded in the air bombardment, riddled with shrapnel and blinded in one eye. While he was in this condition, a US Special Forces soldier shot him twice in the back – a war crime in itself under the Geneva Conventions. Within days of being shot, while still in critical condition and bleeding from gaping bullet wounds in his chest, he was subject to torture by US military personnel. It was at this point he was accused of having killed an American soldier. Interrogators tied him in painful stress positions to aggravate his wounds, hung him by his wrists for hours on end, and subjected him to a litany of other cruel, degrading, and inhumane treatment.

Omar’s torture is now a matter of public record, Edney pointed out on Wednesday, citing legal documents such as Omar’s affidavit, the testimony of Omar’s interrogators themselves and of other prisoners held with him. Omar’s chief interrogator, Sgt. Joshua Claus, later pled guilty to crippling two prisoners and murdering two others who died after his interrogations. Edney described that in his own personal interviews with Claus, the man confessed that he had never been harder on anyone than he was on Omar.

It is under these conditions that Omar made his “confession.” This was the only evidence against him, and to this day he is still imprisoned in Canada based on it.

Omar’s decade of imprisonment and torture in Guantanamo was illegal under international and Canadian laws, but was allowed to continue by the Canadian government. The first duty of a government is to the safety of its citizens, and especially its children. But instead of providing consular assistance and requesting his repatriation, as did all other Western democracies for their citizens at “Gitmo,” the Canadian government actively took advantage of Omar’s situation to contribute to his further torture and indefinite detention.

During his talk, Edney described the Military Commission Process at Guantanamo as a “pantomime court.” It is widely known in Canada that Omar was offered a plea deal. It was one he was coerced by circumstances to take. “He didn’t want to plead guilty,” says Edney. “He didn’t want to go back to Canada as a ‘terrorist’.”

Had he not signed, according to the Pentagon, even if the commission ruled him innocent he could still have faced a lifetime of imprisonment at Guantanamo.

Make no mistake that the Canadian government knows all the details of Khadr’s torture and abuses, Edney says. The Supreme Court of Canada has agreed. On the two occasions it’s seen the case, in 2008, and again in 2010, it ruled that the Canadian Government was complicit in the violations of Omar’s Geneva and Charter rights.

Yet Omar remains imprisoned. Since coming to Canada, he has spent months in solitary confinement, or in danger from the prisoners around him thanks to having been classified a maximum security risk by the Canadian government, against the advice of American officials. He has not had access to the medical care he needs, and is currently losing the vision in his remaining eye.

All this speaks to the abandoning of fundamental principles of justice that have been in place since the 1700s – the right to habeas corpus, to escape guilt and fear by association – as well as principles enshrined in the Geneva conventions, the declaration of human rights, and the declaration on the rights of the child. It is this that Mr. Edney referred to in decrying the failure of the rule of law in this country.

“There is no greater betrayal of Canada than for our government to be implicated in the torture of a Canadian citizen,” Edney said. He placed the burden on all Canadians for failing to make their government take responsibility. His talk could have been called “the evils of apathy,” he said, urging the audience to speak up about the injustices and not to settle for a society that makes decisions based on fear.

“When we are ruled by fear in society, it is then that we fall into lawlessness… [and it is] precisely one of the aims of terrorism to create a climate of fear.”

“Worse, far worse,” said Edney, “we bequeath this social legacy to our children.” 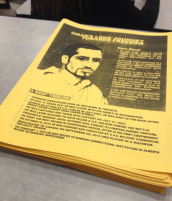 To make a donation you have the following options:

“I went into Guantanamo Bay as a lawyer and I came out as a broken father.” - Dennis Edney.

To hear Dennis Edney speak about Omar, you can watch: